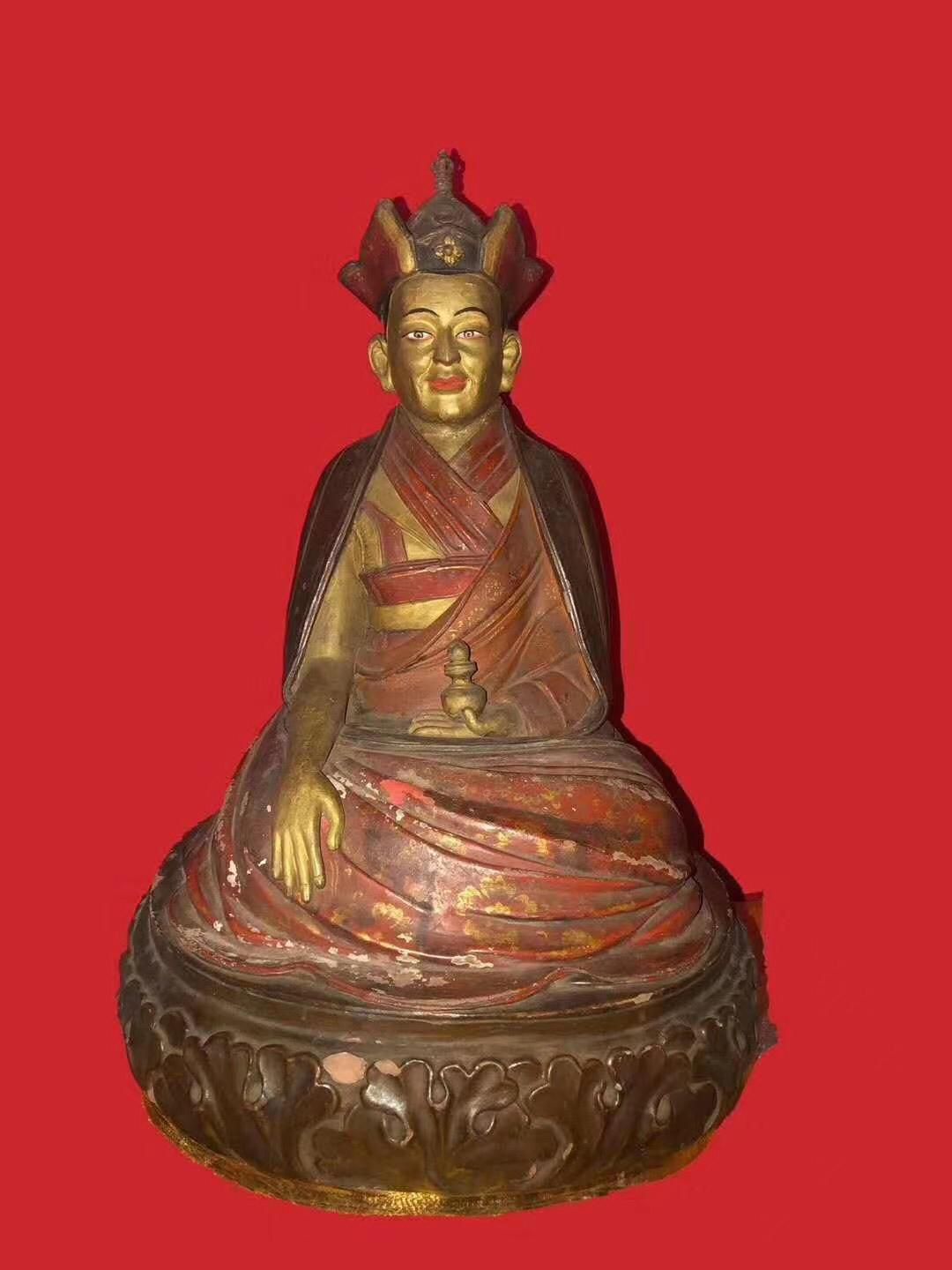 Karma Chagme Raga Asay, a great master of both the Nyingma and Kagyü traditions

Karma Chakme was trained by his father from the age of six in reading and writing, as well as “white” and “black” astrology (Wylie: rtsis dkar nag), geomancy and magic ceremonies for the purpose of averting misfortunes. He was also taught the entire cycle of Nyingmateachings, which he had learned from his father, and continued his training with the most famous Nyingma and Kagyu masters of his time.

He attained mastery of the sūtras and tantras at zad ma gyi monastery and received, at the age of twenty, ordination and the transmission of mahamudra from Thongwa Dönden, 6th Karmapa Lama (1584-1630) at Tsurphu Monastery.He received empowerment during his visit. Then he traveled with the Karmapa for a year and a half achieving fame in Tibet. Karma Chakme's public examination was before 12,000 monks at the Great Prayer Festival of Karma Kagyu.

A contender for the post of 9th Karmapa, he was not confirmed but retained the ordination name Karma Chakme.

He was known for being a prolific writer and scholar, for his ardent devotion to the cult of Sukhāvatī and for being the teacher of tertön Namchö Mingyur Dorje, who revealed a unique cycle of terma known as the Nam Cho (Wylie: gnam-chos). Karma Chakme was credited as a mahasiddha attaining an authentic emanation of Jinasagara, the "Red Avalokiteśvara".

Within the sky-expanse, the compassion of Amitabha, Rises the sun-mandala, powerful Avalokiteshvara, Radiating light of Padmasambhava's mind, To completely dispel the dark ignorance of beings. I pay homage at the feet of Karma Chagme.

The Teacher, the Victorious One, the perfect Buddha declared, "In the future, this teaching of mine will spread further and further to the north." As suggested in this prophesy, in the snowy land of Tibet, an extraordinary place tamed by the Arya Avalokiteshvara, emanations of Buddhas and Bodhisattvas as numerous as stars in the sky have intentionally taken rebirth for the benefit of the teaching and beings. One of these Bodhisattvas was prophesized again and again by both the Victorious One, the perfect Buddha, and by the great master of Orgyen, Padmasambhava. This guide of gods and humans throughout cyclic existence and nirvana, the exceptional crown jewel of the entire collection of the ancient doctrinal texts, the great regent of Siddha Orgyen Pema, the One renowned over the full compass of the earth, is Karma Chagme Rinpoche.

Here is a brief explanation of how he was identified in the prophesies of the Buddha and how the deeds and liberation stories of the rosary of his successive incarnations unfolded.

Thus, prophesy is made repeatedly in many sutras and tantras of the coming of thirteen incarnations of one who is the embodiment of the three kayas-the Dharmakaya, the Sambhogakaya and the Nirmanakaya-and who has a syllable "Ah" naturally arisen on his head. This great accomplished scholar and Bodhisattva, the shining glory of the teachings and beings who dwells on the bumis, was born in a place called Char-Ngom of the Lower Salmo Gang region of Kham in 1608 with many wonderous signs as the son of mother Cho Kyong Kyid and father Yogin Anu Pema Wangdak of the family line of the emanation of Noble Manjushri, the Dharma King Trisong Detsen. From the time he was very small, he possessed the inconceivable and inexpressible qualities and attributes of a great being such as loving kindness, compassion and an altruistic mind. He studied the complete instructions relating to the inner and outer teachings of the secret Rigdzin lineage held by his father. When he received teachings on the sutras, tantras, shastras and sciences, he had no difficulty, he only needed to glance at the texts to understand their meaning completely. Like a gem of heaven among the stars in the sky, he was the crowning jewel of all scholars and siddhas. Relying on the incomparable liberator Garwang Choekyi Wangchuk as his principal teacher, he received from his full monastic ordination, and then heard instruction on Mahamudra and the Six Yogas in the same way that one full vase is poured into another. Likewise, received empowerments, instructions and reading transmissions of the new and ancient traditions from many spiritual guides.

His first place of residence was Palri Tse, where he remained for a long time in strict retreat, meditating on The Great Compassionate One [Avolakiteshvara]. There, he had visions of many yidam deities. In particular, he had a prophetic vision of the supreme Arya, the lord of the world appearing in a physical human form, the great regent of Guru Padma, Namchoe Mingyur Dorjee. As soon as he was born, he appeared [before Chagme Rinpoche in retreat]. Chagme Rinpoche, with deep affection, offered him ablution and attended him as a teacher. He listened to the complete, profound oral insructions of Dzokchen, and thus he became the main Dharma heir of Namchoe, the most profound and essential of all treasure teachings. Thereafter, he actualized the ultimate realization of the practice of unifying mahamudra and maha-ati, becoming a holder of the Teachings of the Ancient Translation Tradition. As an indication of his perfection of the qualities of the paths and bumis, he mastered all qualities of enlightened body, speech and mind-such as clairvoyance and miraculous powers. Countless numbers of his students achieved realization- those fortunate ones who received empowerments and special instructions directly from him, as well as those whose devotion stemmed from reading his written compositions.

Haughty gods and demons employed themselves in his service and offered him their lives. As evidenced by his miraculous abilities and mastery, he was the indisputable great Lord of Accomplishment. In particular, most scholars and siddhas relied upon Chagme Rinpoche as their master. In addition, the Neydo Lineage, famous throughout this land of snows, arose solely due to the kindness of this great, accomplished lord.

In general, he had countless disciples, but there were Five Great Sons who became his Heart Sons: Moreover, countless incomparable great, holy incarnate beings-holders of the lineages of both scholarship and practice-came from him. He held both the root Dharma lineage of Neydo practiced principally in the Kagyu Tradition, and the Dharma lineage of Palyul and Dzokchen etc. practiced principally in the Nyingma tradition. These became a single lineage that completely pervaded the countries of Kham and Amdo. This precious golden rosary has not diminished to this day; it has spread and continues to spread as the heart of the Buddha's teaching to all corners of the earth. Although to our ordinary perception their bodies appear to dissolve into the dharmadatu, Buddhas and Bodhisattvas directly and indirectly teach and act for the benefit of beings until samsara is emptied.

Shantideva said:
"As long as space exists, And as long as sentient beings exist, May I remain And dispel the suffering of beings."

Accordingly, in the perception of the great accomplished master himself, although he fulfilled the intentions of Samantabhadra, he continues to teach and accomplish the benefit of beings through his legacy of written compositions-in particular through the Dharma masterpiece that came to him in a visionary revelation. When Chagme Rinpoche was meditating in strict retreat for a period of twelve years, Orgyen Rinpoche came to him in a vision riding on a rakshasa [demon]. Right after seeing his face, Chagme Rinpoche saw the four vajra verses appear. Based on these verses, he composed the text that benefits beings infinitely, Personal Instructions of Great Compassion [Tukje Chenbo Martri] in eighteen chapters together with a commentary on the work. After the text was finished, Avalokiteshvara appeared to him and prophesized, "This Dharma will bring 18 billion sentient beings to the Pure Land of Dewachen." Furthermore, from the Richoe "The Mountain Dharma" Tsam instructions down to compositions on divination and astrology, there are a total of 77 collected volumes of his writings alone. Whatever compositions he wrote were imparted by the supreme deities. Therefore, they are endowed with blessing, possess vast benefit for all sentient beings, and are more amazing and wondrous than most treasure teachings.

After thus immeasurably benefiting the teaching and sentient beings, thinking only of his disciples, he dissolved into the dharmadatu at age 65. After he was cremated, many relics and bones imprinted with the forms of deities were found among the ashes. On his skull was found a manifest, self-arisen letter. These amazing, inconceivable signs, beyond the sphere of ordinary experience, were witnessed by everyone. Thirteen incarnations are prophesized. From the second onwards, they have manifested as an unbroken succession of the following incarnations:

All of these great incarnations preformed a vast wave of benefit for the teaching and sentient beings, and in the end dissolved into the dharmadatu. In particular, when the Seven Cycles of Profound Treasure Teachings were first uncovered by the great treasure-finder Chokgyur Lingpa at Ogmin the residence of the Karmapa, the treasure-finder himself and the Glorious Gyalwang Karmapa Kachab Dorje-sharing the same vision, prophesy and intention-recognized and enthroned the fifth incarnation Sang-ngak Tendzin as the Great Vajra Master of Secret Mantra. The treasure-finder himself offered him some of the treasure: He extracted a hat called Pema Tong-drol. Inside of this, he found inner accessories that he offered to Sang-ngak Tendzin to wear. To explain, the great terton (Treasure Revealer) and the Glorious Gyalwang Kachab Dorje both promised in their symbolic praises of the hat that whoever-whether they be great or evil-comes into contact with the precious hat Pema Tong-drol, this precious, inconceivably wondrous Dharma, will purify his or her karma and negative emotions, and will be reborn in the western pure land of Dewachen.

The present and future refuge and source of hope for us sentient beings who live in the age of the five degenerations is the protector and spiritual friend, the incomparable, supreme guide, the manifestation of Chenresig, the seventh incarnation of the scholar-siddha Karma Chagme-named the supreme Karma Tendzin Triley Kunchab Pal Zangbo. He was born in the year 1926 into a distinguished family of Lhatok, Kham, in the lineage of the secretary to the King of Lhatok. His father was named Yeshe Rabje, and his mother was named Troru Sonam Dronma. As soon as he was born, there were inconceivable, excellent, wondrous omens that were witnessed by all present: For example, the guardian Shang Jongma left hand-prints on his mother's bed, as an indication that he would guard the child day and night.

The glorious Lord of the Victors, the Sixteenth Karmapa, supreme Rikpay Dorje, while he was staying at Karma Gon, the first residence of the glorious Dusum Kyenpa, preformed a divination and recognized the amazing child who was marked by the guardian Shang Jongma as the unmistaken incarnation of the scholar-siddha Karma Chagme. In accord with his divination and the signs accompanying the birth, he bestowed on the child the name Karma Tendzin Trinley Kunchab Pal Zangbo. He was later enthroned at Tashi Choeling, the main monastery of the incarnations of Chagme Rinpoche. 5th Neydo Sangtrul Rinpoche was appointed as his teacher, and he studied the sutras and tantras under him. Furthermore, he received empowerments and reading transmissions from holy scholar-adepts of all traditions. Especially, he received-like pouring the contents of one vase into another-the transmission on the cycle of teachings called The Union of Mahamudra and Maha-ati, the main instructions held by the Chagme incarnations of this lineage. He practiced these teachings as a hidden yogi. He had many transcendent experiences like the continuous flow of a river, such as seeing the faces of yidam deities, and receiving signs and omens.

Here are a few stories that Rinpoche has occasionally, playfully offered: